In the beginning there was beer…
And brewing was profitable for the owners of the Pszczyna region – such words were put down in the income book from 1613. This first mention begins the story of Tyskie Browary Książęce, which is filled with twists and turns.

Officially, the brewery was established in 1629: it was written in the urbarium that beer could be brewed in the manor every week, which brought “significant benefits”. The brewery was founded and owned by free men of the Promitz family.

In the 18th century, the brewery collapsed and only after 100 years it was taken over by a perfect host, namely Prince John Henry XI Hochberg of Pszczyna, an entrepreneur and visionary who turned the brewery into a unique place in Europe. The brewery took its name from his title.

The Prince modernized and expanded the brewery, transforming it into a pearl of 19th century architecture. And it happened in 1861. He also equipped the brewery with the latest achievements of the epoch: electrification and iron railway. However, his masterstroke was something else.

Julius Müller was not only a master brewer, but also a world traveler, who brewed beer in many European breweries. He found out the secret of an excellent golden lager, which he brewed with the use of bottom-fermentation yeast. He was hired by the prince.

Müller used this method in a brewery in Tychy and obtained beer as we know it today: golden, lager with thick foam. This method led the brewery straight to success: large-scale production was started and the Tychy lager became well-known all over Europe.

Beer is brewed when fates are in balance

From the very beginning, the prince focused on modern brewing technologies: he introduced machines for drying malt and producing ice, a lift for transporting barrels from the storage cellar and an automatic bottling plant. The brewery was therefore able to meet the huge demand.

In 1897, Tyskie Browary Książęce brewed 10 million litres of beer for the first time. This was a great achievement and the brewery was at that time one of the largest in Europe.

After the plebiscites, the brewery remained within the borders of Poland, but the peace lasted only for a short time. In 1939, the brewery went into administration of the Third Reich and started brewing “Wehrmachtsbier”, beer for the army. When retreating, the Germans mined the brewery, but did not detonate the explosives.

Only the highest quality will survive.

After the Soviet army entered in 1945, the employees saved the brewery from devastation and the equipment from deportation. A year later the brewery was nationalized and the crown associated with the “class enemy” disappeared from the labels. It did not return until 1982.

In the 1990s, the brewery experienced privatization and huge investments in new technologies. There have been many changes of this kind over the centuries and only one thing hasn’t changed: the care for the highest quality beer. It has been a priority for four centuries.

Julius Müller and the new method, newer and newer devices and laboratories that have been controlling beer quality for over 100 years, and finally the use of closed fermentation in the 1960s. If we add the passion of people associated with the brewery, we will get a beer which is deservedly called “Gold of Tychy”.

Discover the stories of our employees. 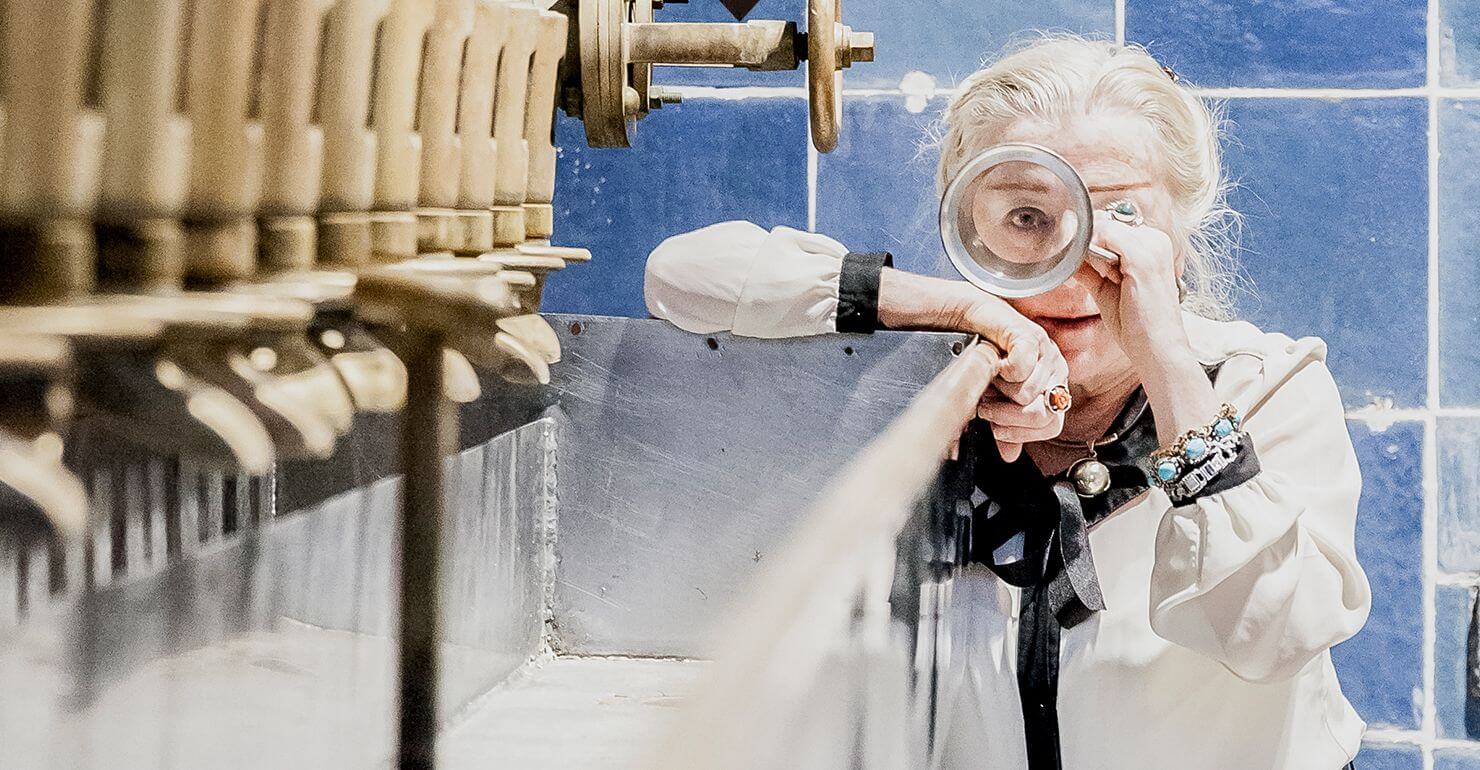 Get on a first name basis
with Stenia.

"When my son found out that I wanted to take part in the recruitment process for a guide to the Brewery Museum in Tychy, he laughed that I didn't even know what a wort was. But I had done a lot of things earlier in my life: I had been a teacher, a tour guide, a balloonist and a firewalker. During the recruitment process I had to prepare a presentation on any subject and my friend, who is also a collector, lent me a few beer mugs from his collection. One of them was all made of metal, but it had a glass bottom. I wanted to know why. There was a flap in the mugs, and so it was easy to deduce that there was a plague. And as it turned out, there was a custom in England that you could recruit a random man for years of hard work by buying him a beer in a pub and throwing a coin inside. Hence the glass bottom - in order to protect yourself against "an offer you can't refuse" while drinking beer. As you can see, I like to ask why and I like to know the answers."

Soon, we’re opening
for you anew!

Due to the ongoing revitalisation work, Tyskie Browarium
(Museum and Visitors Centre of Tyskie Browary Książęce)
is closed until further notice.

We apologise for the temporary unavailability of the facility,
however, we are sure that the final effect will be amazing
and will give you unforgettable impressions.

As from January, we are cordially inviting you
to our Pod Browarem pub, where, in the exceptional interior
and intimate atmosphere, we will become friends while enjoying
the excellent taste of fresh Tyskie beer from the Brewery
and of other types of beer from the rich offer of Tyskie Browary Książęce.